On Tuesday 24th May CEC President, Ludger Ramme, and CEC Secretary General, Luigi Caprioglio, have met with MEP Lara Comi (left), member of the EPP Group (and vice-President) as well as member of the internal market Committee (IMCO). MEP Comi follows from close the issues of international trade and the protection of the European manufacturing sector within the context of the globalized economy.

On the following day, the CEC President and Secretary General were received by MEP Alessia Mosca, vice-President of the Committee for the relations with the Arab peninsula, member of the S&D group and of the international trade Committee (INTA). MEP Mosca (right) is very familiar also with the issues of gender equality and the presence of women in managerial positions within companies.

In addition to the issues mentioned above, these two meetings offered the oppportunity to present the project of CEC to raise the awareness of the European institutions of the importance of the managerial workforce for Europe’s economic growth and social progress through a revision of the “Gil-Robles resolution” on the situation of managers in Europe. The resolution, adopted by the European Parliament in 1993, descibed for the first time the 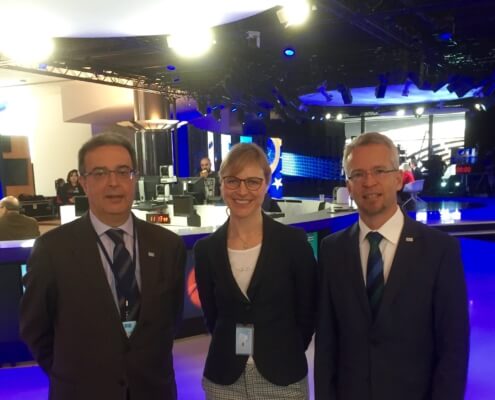 characteristics of the managerial workforce in Europe, and represented the first step of that process of official acknowledgement of the role of managers in Europe that would culminate in 1999 with the admission of CEC European Managers in the European social dialogue. We believe it is now time to update that resolution, to take into account the many developments that have occurred since (from a new social sustainability dimension, to the efffects of digitalization on the patterns of work and on the role of leadership)

We stood with Paris, we now stand with Brussels

Congress of European Managers, 7th and 6th June in Montenegro
Scroll to top