You are here: Home1 / Positions2 / Our Topics3 / Europe4 / CEC/CIDA Round table in Rome – European managers and the crisis

On the occasion of the meeting of the CEC Steering Committee, which took place in Rome last October 10, a round table was organized with representatives of CEC Member organizations to talk about the economic crisis and present the analysis of managers of its causes but mainly of the measures to adopt to help European economies overcome the crisis.

The first presentation was given by Mr. Bertolini, who stressed the importance of focussing on recovery and economic growth and called on the necessity to adopt new measures and a different policy orientation. President Elias followed in the discussion, insisting on the fact that all structural reforms adopted throughout the crisis have been a necessary step to modernize European economies, but at an often too high social cost. Such modernization efforts will have to continue (including those concerning our welfare systems), but without calling into question the current levels of social protection that are at the basis of the European social model, one of the distinctive traits of the “European system”.

In the end, Mr. Polillo drew some final conclusions on the current state of European economy, which necessitates a stronger and better coordination of the measures adopted by national governments. It is necessary that European countries agree on a “compromise”, aiming at economic growth and recovery. In order to do this, European governments should be ready to renounce to measures that could be favourable in a domestic perspective but that would risk amplifying the effects of the crisis when considered in the European context. 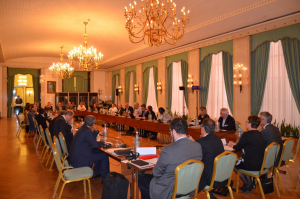 Consultation: practical implementation of the WTD