Please find the members’ news from the newsletter 102 below:

Day for the prevention of stress

In Europe, persons suffering from stress in average have a 7 years lower life expectation than the general population. Stress is the underlying cause of 10% of  work-related illnesses. These and other facts were discussed during the the Day for the prevention of work-related risks, organised by the Spanish Confederación de Cuadros y Profesionales (CCP) on 27 June at their headoffices in Madrid. The objective was to defend and promote best practices within companies to create healthier working environments, managed in a way that assures the participation of all workers.

Besides avoiding monotonous and repetitive tasks, it is important that efforts are rewarded and that the feeling of being out of control doesnt get the upper hand.

On 5th June 2018 has started the 10th mandate of the National Council for Economics and Labour (CNEL), in wich CIDA is represented by the President Giorgio Ambrogioni. On that occasion, representatives of all the social and productive forces of the country have signed a call for the reform of the Council because it can contribute to build a more modern mode of participation and expression of relevant social issues. Such a reform could furthermore mediate; contribute to social and economic innovation, as in other EU countries; contribute to reforming the institutions and legislation of the EU and aiming for a more social and inclusive European Union.

The President of CIDA, as management representative, has also been called to be part of the Presidency Committee, with the task, among other things, to act as spokesperson for the positions and evaluations of other minor management confederations.

At the same time, CIDA has scheduled a series of meetings with the new Italian Government to present the vision that Italian managers have of the country to the new political forces. 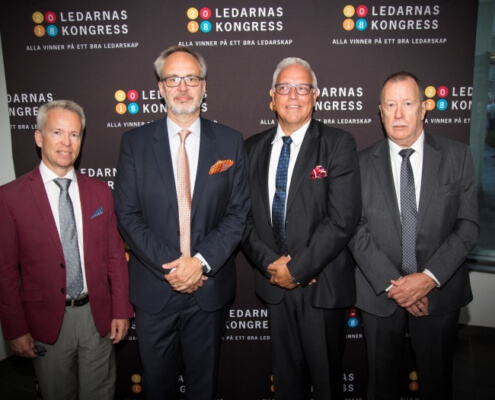 At Ledarna’s congress at the end of May, Andreas Miller was elected new Chairman of the Board. He succeeds Annika Elias, who held this position for twelve years. Andreas Miller joins from Sveriges Radio, Sweden’s national publicly funded radio broadcaster, as a manager. “It’s a great honor and inspiration to fully focus on the value of leadership following 16 years as a manager,” says Mr. Miller.  The three day congress highlighted Annika Elias’ successful contribution to the CEC. Sitting President, Ludger Ramme, was the keynote speaker. He reinforced the importance of the European project and clarified how CEC makes a difference.

Slovenia is ranked 48th out of 137 in the Global Competitiveness Index, 37th among the 63 countries in the World Competitiveness Ranking by IMD as well as among the top 10 countries according to the Human Capital Index. But we cannot capitalize on this potential. Slovenian productivity is 20% below the European average, with the greatest obstacles being the institutional environment and the factors associated with knowledge and under-performance of technological progress. At the Managers’ Association of Slovenia, we strive towards overall progress achievable with responsible leadership and expert management of our members. To support this aim we established a Working Group for Modern Leadership, which also represents one of our strategic goals. In one place we have gathered leading managers and experts in the field of leadership who will strive to spread the good practices of Slovenian management and examples of modern leadership, promote and use the metrics of modern leadership in the practice of companies, promote usable learning and transfer of knowledge.

As established by the recapitalisation process that was negotiated with Brussels, state-owned bank Caixa Geral de Depósitos (CGD) will have to dismiss 2,000 employees and close 180 branches until 2020. As generally happens in similar negotiations, the process was marked by opacity. In any case, we can ask ourselves what a state bank is useful for when management criteria and practices are the same as those applied in the private banking sector.

For many years, the debate on the matter was characterised by a plethora of arguments in favour of keeping CGD within the state sphere. The main argument was that, having the state as the only shareholder, the institution could thus be managed with criteria and practices aimed at attaining more than the maximisation of profits. For instance, CGD was an instrument that had contributed to territorial cohesion through an extensive network of bank branches, with a particular focus on the country’s interior.

However, Brussels has imposed the famous ‘remedies’, including the closing down of branches. CGD’s board has been deciding on which branches to close, under the watchful eyes of Portuguese state authorities. With this in mind, how can the Portuguese government argue that it intends to safeguard territorial cohesion while allowing bank management criteria and practices that are solely focused on operational results and completely ignoring its responsibilities?

Seminar on Management in the Age of Artificial Intelligence

Social dialogue in the digital age : a chance for Europe
Scroll to top