Global terrorism, extremist rhetoric and companies suffering of “diversity fatigue” seem, together with economic ”hard facts” considered more important, to transform diversity into an empty catchphrase at its best and into an overhauled concept at its worst. Despite or because of that, we at CEC European Managers are convinced that discussing diversity has never been more relevant than today. Nothing less than our society as a whole and international peace are at stake. Our approach is that changes must happen where they are most effective: most often, in the workplace. Responsible leadership will be essential to transform the vision of a pluralist society into reality. 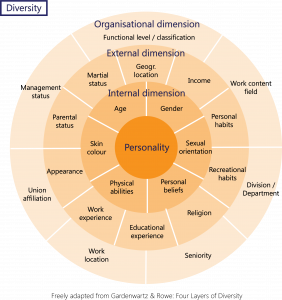 Diversity is a universal phenomenon existing in the person and among persons as personal and social traits. As a fact, it concerns similarities and differences regarding age, political affiliation, beliefs, socio-economic status, lifestyle, sexual orientation and background to name a few. The transformation of diversity as a fact into opportunities through adapted policies is what we call a pluralistic approach.

In the discussion about diversity there has been a shift from trying to assimilate minorities towards an idealised majority culture to an approach emphasising the need for structures integrating that diversity. Instead of creating departments to integrate each minority, organisational structures able to absorb this diversity are created. This approach bears the advantage of creating a unique framework in which different dimensions of diversity can be expressed. For example, a black woman can have specific problems that are not taken into account by initiatives solely dealing with discrimination towards gender or colour identity.

Studies have shown that the increase in the sense of belonging through an inclusive (working) environment reduces stress, improves mental well-being, physical health as well as performance. Furthermore, globalisation and digitalisation require thinking more diversely. By representing society’s diversity in one’s own organization, new target audiences can be reached out to, problem solving capacities can be increased and spaces of creativity as the basis for new ideas built. In that sense, diversity management contributes to increase competitive advantages by getting more talented staff and being able to more flexibly adapting to changes.

Diversity management deals with the analysis of structures, organisational and personal processes and the change of organisational culture of staff and management. Existing procedures and regulations are checked with regards to their adequacy and permeability to people with their respective capacities and potentials. Diversity management is about taking quality decisions in situations where there are problematic differences or similarities in order to remove structural disadvantages to the full personal and organisational development. As such, this process of elaborating the way to a decision can be learned. Apart from being aware of diversity, managers have to be open-minded and empathetic to perspectives different than their own – in short it is about developing cultural competences enabling effective diversity management.

The problems relating to diversity can stem from personal, social and cultural factors.
Individually, different roles might be incompatible with one another, for instance certain professions incompatible with religious beliefs. Socially, a majority can resist changes of social dynamics in the organisation or within the society as a whole. Culturally, barriers with regards to belief systems, language or behavioural norms can threaten the efforts to make use of diversity.

These problems can be addressed through establishing a diversity assessment and evaluation. These form the basis for a diversity policy plan and its succeeding implementation. At all stages, a strong commitment of the management has been shown to be effective for the success.

Generally, it is important that top-down strategies, such as policies against discrimination or providing education, are complemented through a bottom-up approach. The latter leaves spaces to adapt the implementation to the specific context, as for instance through participation of employees in an organisation. The asserted “diversity fatigue” (The Economist) stems from lacking success of certain diversity policies in companies. Research, however, has identified practices that help building a pluralistic working environment. Namely, voluntary diversity trainings, hiring diversity managers, mentoring programmes and internal diversity task forces [1].

Talking about the political dimension of diversity, the idea of treating everyone the same has proved problematic. Treating everyone the same, although everyone being different, means to establish a hypothetic standard or idea of what is normal, thus opposing reality. In other words: it is about working on inclusiveness by creating conditions based on humans and their capacities instead of adapting humans to an idealised norm. In that sense, legal and political frameworks labelled equal opportunity and affirmative action, can contribute to fight against the most apparent discriminations by providing a legal framework (as the last resort) or empower a certain minority, bearing the risk of being labelled as positive discrimination. Deeper changes however, can only emanate from the social context, such as the company culture.