Please find the members’ news from the newsletter 106 below:

CCP meeting with the Director General for work, Ángel Allué 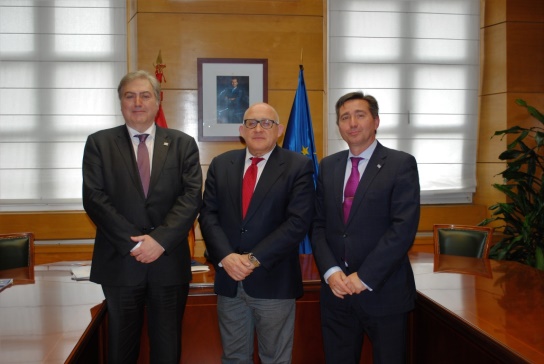 The current Director General for Work under the new socialist government has received the President, Manuel Martínez, and Secretary General, Juan Antonio González, of CCP in the end of January.

During the meeting, CCP presented its organisational structure, presence in large Spanish companies and sectors, as well as negotiations on collective agreements.  The President and Secretary General have renewed their call for reforming the law on trade union rights and liberties that dates back to 1985. Mr Allué showed signs of openness to the proposal, recognising that the law does bit correspond to the contemporary social realities of Spain.

Finally, the Director General emphasised the unifying role of trade unions in a society like Spain, where social cohesion and solidarity are increasingly exacerbated. The meeting offers a constructive basis for future relationships between CCP and the Ministry of Work.

The suggestion is to change the maternity leave rules, so that the present 32 weeks of parental leave with the right to publicly paid maternity allowance in the future must be shared equally by 16 weeks for each parent.  Currently, the mothers take almost 10 times as much leave with maternity allowance as the fathers do. This distribution is very unfortunate for the women’s further career when studies unequivocally show that the long maternity leave puts a serious damper on women’s wage and career development for many years after the leave.

This proposal will strengthen women’s pay and career development, and at the same time not infringe on leadership prerogatives in terms of how to recruit or promote employees and managers.

The rules under the maternity / paternity leave are not to be changed before the birth or maternity leave immediately after birth, where for reasons of breastfeeding of the child and the mother’s health there are good reasons why the mothers are entitled to a longer period of maternity benefits than the fathers.

The most recent co-determination barometer, presented by Lederne and four other employee organisations, shows relatively large differences in the degree of co-determination in different industries in Norwegian society. The barometer was established by the Labor Research Institute (AFI) at Oslo Metropolitan University. While the findings show that there is a large degree of correlation between the degree of co-determination, influence and participation in the private sector and in organisations, the situation in the public sector, especially the state, is the opposite. However, the barometer does not clarify the underlying reasons.

The co-determination barometer also shows that the Norwegian cooperative model in working life, both the two-party cooperation between the employers` side and the employee`s side, and the tripartite cooperation where the government is also involved, ensures a relatively harmonious working life compared with many other countries.

However, the Norwegian labour model is under pressure in the form of what could be defined as “hard HR” and more “Americanized” and authoritarian forms of management. This, in turn, is partly related to new ownership structures in the companies. Lederne therefore believes that the training of union representatives, a higher degree of trade union organization, awareness on Norwedian working life history and, not least, protection of the Working Environment Act, is of crucial importance, says Tor Haehre, senior adviser to Lederne.

Women in management: progress is needed at all levels