You are here: Home1 / News2 / Events3 / Managers united for a united Europe during meetings in Belgrade

Shortly after the European Summit in Sibiu, and only a couple of days before the elections to the European Parliament CEC European Managers, the European social partner organisation representing European managers, has organised its statutory meetings and a seminar on the future of Europe in Belgrade on 20 and 21 May. During the event, CEC has welcomed two new member associations from Hungary and Czech Republic among its ranks. The extension of its membership across the continent is a sign of strong managerial unity which will prove necessary to advance managerial issues in the coming years. 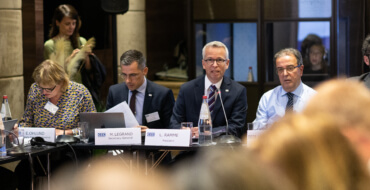 On the first day of the Belgrade meetings, co-organised with the Serbian member organisation SAM, delegates have discussed the growing strategic importance for manager associations and manager trade unions to think economic, social and environmental development together. Record levels of professional mobility and the transnational nature of today’s policy challenges make further cooperation within a European umbrella organisation for managers even more relevant. In that respect, the Czech Management Association and the Hungarian Menedzserek association, who have just joined CEC, will enrich the debate about the prospects of making management more sustainable and professional throughout the continent. In the coming years, CEC will sharpen its profile as promoter of sustainable management and social dialogue, voice of managers’ interests and hub for best management practices.

On the following day, participants discussed about the future of Europe. To incite managers to contribute shaping the policy agenda for the years to come, CEC has adopted a call to vote for the elections of May 23-26. More than ever, the unique political project of the EU has to be protected and made fit for future challenges. As the voice of European managers at EU-level, CEC highlights the need for an updated European Parliament resolution on managerial staff, underlining the social and economic contribution of the category to Europe’s wellbeing. Sustainable leadership, lifelong learning and gender equality count among the cornerstones of an evolving profession.

During the panel debate, a selection of distinguished guest discussed the main challenges for the EU in the coming years. The participants agreed that the rise of extremist forces in several member states and foreign powers seeking influence in the EU’s neighbourhood require the EU to better encourage citizens’ participation and to strengthen ties both within and beyond its territory. Speakers during the seminar included H.E. the Romanian Ambassador to the Republic of Serbia, Dr. Oana-Cristina Popa, who presented the position of the Romanian Presidency of the European Union, Suzana Grubjesic, Secretary General of European Movement Serbia, Ludger Ramme, President of CEC European Managers, Stanka Pejanovic, President of SAM – the Serbian Association of Managers and François Hommeril, President of CFE-CGC, the French confederation of professional and managerial staff.

Please find the photo gallery of the event here.

Call to vote for the European elections

European election results are an opportunity to learn from mistakes and move...
Scroll to top