You are here: Home / Positions / Our Topics / Europe / Breaking down walls is more urgent than ever

The 9 November 2019 marks the thirtieth anniversary of the fall of the Berlin wall. The reunification of Eastern and Western Europe, later through the EU, has brought peace, prosperity and hope to all European citizens. Today however, extremists, growing inequalities and geopolitical risks threaten the future of our European democracy, economy and society. More than ever, we have to stand strong against those promulgating fears, lies and hatred. Managers have a particular responsibility in ensuring that no destructive seeds can be sowed in workplaces. Growing social unrest in many parts of the world should be a striking warning to avoid economic paralysis. 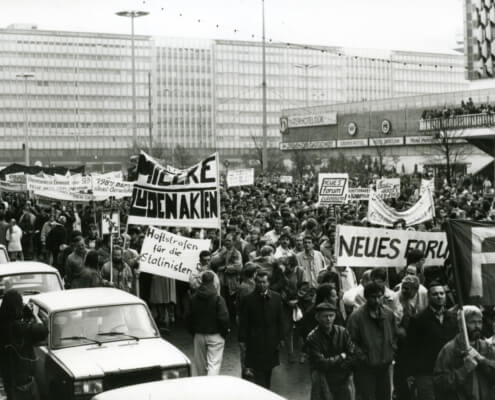 The largest demonstration in the history of the GDR on 4 November 1989, Berlin Alexanderplatz. Thomas Wiesenack under CC-BY-SA

The European Union faces great challenges both internally and externally. Thirty years after the fall of the Berlin wall by the will of Eastern German citizens and 81 years after the November Pogroms by the National Socialists, divisions on the continent gain hold again. Extremist forces are trying to undermine trust in the democratic system, while legitimate concerns with regards to the EU’s institutional setting are insufficiently being responded to. Furthermore, social rights, including social dialogue, in an increasing number of member states are threatened. This stands against the background that a large majority of EU citizens and many managers, such as those affiliated with CEC European Managers, have understood that economic progress can only go hand in hand with social justice. Therefore, the European Union has to better deliver on the social dimension of Europe.

Today however, many EU citizens have the impression that important decisions to deliver on a new deal for our economy, society, climate and nature are being postponed.

“The time for shying away from taking decisions is over. We have to act. The EU is responsible for its own emissions, for its own economic outlook, for its own social peace. We have to lead by example in transforming our continent sustainably. Then the world will follow” – CEC President Ludger Ramme.

Instead of purely reacting to the ever more aggressive strategies of anti-democratic forces in many EU member states, a positive, powerful and sustainable vision for the EU is needed – followed by determinate action.  The European New Deal, announced by Commission President-elect Ursula von der Leyen, has to be a deal covering climate, social fairness and strengthening democracy. Our economy is strongly dependent on stable economic conditions. We have to build a green competitive advantage and ensure social fairness to uphold purchasing power in order avoid social tensions leading to economic paralysis.

But above all, we need courageous people leading the necessary changes and ensuring that hate gains no hold. Against that background, CEC advocates for introducing a European Transition Skill Scheme for workers and managers to facilitate the creation of business models respecting the environment, social progress and long-term economic performance. Besides technical skills to manage the sustainability transition, beneficiaries of the programme should also see their transversal leadership skills, as well as emotional regulation and social skills being strengthened. This is particularly relevant for a service-oriented information society.

Thirty years after the fall of the Berlin wall, we have to break down walls among people, among nations and in minds. Sustainable leadership is needed more than ever.

How sustainable is the platform economy for Europe?